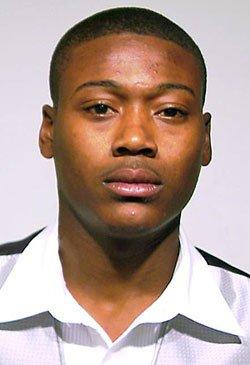 Lorenzo Bracey was all set for his prom. He had the clothes – a white tuxedo with a gray and black vest, a white shirt and the wheels to get there. The problem, police say, was the way he obtained his transportation. Bracey, 20, ‘reserved’ the vehicle by stealing the SUV from its owner at gunpoint.

The Chicago Tribune reports that Bracey carjacked the maroon 1997 Ford Expedition earlier that morning, in the 1200 block of South Independence Boulevard. About ten hours later, the owner of the vehicle spotted it parked at a McDonald’s less than a mile away from where it had been stolen.

When the police arrived, they found Bracey still at the restaurant, all dressed in his tux. He told them he was planning to attend prom that night; however the report did not specify where the prom was being held or who he was planning on attending it with.

Police reports say that when he was arrested, Bracey had a loaded 9mm handgun with a defaced serial number in his waistband. He also had marijuana and ecstasy pillsin his pocket.

Convictions of these crimes could result in a lengthy prison sentence for this defendant. If you have been charged with a felony or misdemeanor, you need a qualified criminal defense attorney to advise you.